Today Rebecca Demarest shares the inspiration behind the very unique voice of her novels, short stories, and blog. I had the pleasure of reading samples of her work, and her style is quick-paced and authentic. She isn’t afraid to tackle tough subjects with sensitivity and realism. After immersing myself in her writing, I was incredibly impressed by how driven she and prolific she is so early in her career.

I am a mild mannered technical illustrator by day and an author and book designer by night. My writing ranges from literary to speculative fiction, with an emphasis on bridging the gap between those two genres. I have a B.A. in English and Psychology from Willamette University and an M.F.A. in Creative Writing from Emerson College.

What was your inspiration for your novels, Undeliverable and Mark of the Storyteller? 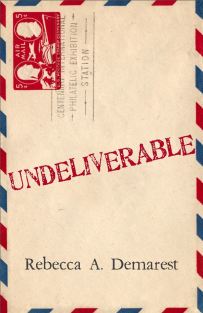 Undeliverable was inspired by a random news story I heard talking about this mysterious Lost Letters Office—now the Mail Recovery Center—in the United States Postal Service. I was intrigued, and started digging into its history and its current operations. That was much harder than it would seem because no one at the Center is actually allowed to speak to civilians about anything and their monthly auctions are actually rather secretive (I was nearly arrested for taking pictures). But once I had a sense of what the Center did on a day-to-day basis, I started contemplating what kind of story could happen there, what kind of people would be drawn to it. After a couple years of research and free-writing, Ben slowly came into focus and his story took shape. A lot of the details of the characters themselves came from myself, my family, and my friends, which helped to make them real to me.

As for Mark of the Storyteller, this was actually inspired by my senior thesis class at Willamette University. It was a fantastic class about Grimm’s Fairy Tales and we were given the opportunity to either do a research paper on the tales or create our own unique re-interpretation of them. I leaped at the chance to do a creative English thesis as I was already weighed down with a research thesis in Psychology, and wrote a short story that eventually became the villain interview section at the beginning of Mark. The basic concept I had wanted to address was ‘What happens when the villain isn’t who we think it is, but is instead the one person we’re supposed to root for? And why do we have those misperceptions?’ Let me tell you, creating the world that all these characters live in and wreaking havoc on the stories and characters we know well was an immense amount of fun.

News sites, actually. Articles about bleeding glaciers, people hijacking barrels of maple syrup, or the fact that the ancient Egyptians made jewelry out of meteorites can all give my imagination a boost. Also, turning off your music and actually paying attention to the world around you while you walk, including eavesdropping on your fellow commuters, can provide some outlandish leads.

The absolute strangest thing was an article about a lithopedion, or stone baby. A lithopedion is the result of an ectopic pregnancy that self terminates after the 14th week and the mother’s body calcifies the fetus to prevent it from causing harm to the mother. I couldn’t help it, the idea just grabbed hold of my brain and I couldn’t shake it, so I’ve got a short story in the works centering around this phenomenon.

While I have found many of my writing instructors and friends inspirational, the woman who is the most inspirational would have to be my mother. She has not led the easiest of lives and has dealt with a series of genetic and environmentally induced health problems, many of which required surgery and extensive recoveries. But through all of this, she has never lost her sense of adventure, determination, or love. In fact, she started her first business just a couple years ago as a professional storyteller and has reached her five year goals, four years early. If she can deal with all of the health issues, two kids, and a husband who traveled extensively for work and come out the other side with enough energy to devote to a whole new career, then I can do anything.

What are some books in your genre that have inspired you?

This is a really hard question to answer because I read a lot of books each year. In the literary genre, I find the work of George Saunders, Scott Nadelson, Steve Yarbrough, Tom Perotta, and a handful of others to be greatly inspiring, mostly modern literary authors. In the speculative fiction genre, I draw a lot of inspiration from Tamora Pierce, Robert A. Heinlein, Patricia C. Wrede, Jasper Fforde, and Terry Pratchett.

Be and not seem. This is one of Emerson’s philosophies, and I’ve had it on my wall as long as I can remember. In my life and in my writing I try to stay true to myself and my ideals. Do not pretend you are a good person, let your work speak for itself. Do not pretend you are competent, actually go out and do the hard work to make it true.

I’ll be doing an Indiegogo campaign in November to help defray the last editing and marketing costs for Undeliverable, which will be launching in March of 2014. If you’d like to learn more about me or my writing, drop by my website at http://rebeccaademarest.com or follow me on Twitter @RebeccaDemarest.