I don’t know about other writers, but when I hit a mental block, I’ll try just about anything to get past it. And I’m willing to admit that I’m not above looking for an easy answer. After all, if I can get a boost of creativity with minimal effort, there’s no shame in that, right? For fun, I did a little research on what the latest information is out there on how to find some inspiration when you’re stuck in a fit of doldrums.

Consider it an early Christmas present. I found several studies saying that daydreaming can increase creativity, including a study by the University of California, Santa Barbara, which promises that letting your mind wander helps your problem solving skills, and another by the University of Central Lancashire specifically encourages daydreaming at work to boost creativity.

I’ve been looking for an excuse, and now I have one. Alcohol does, in fact, encourage creativity. A 2012 study at the University of Illinois showed that having a blood alcohol level of .075 (a couple glasses of wine) increased people’s ability to solve problems and have sudden insights more quickly. Of course, the benefit doesn’t stick if you’re smashed. But for the sake of science (and solving my current plot puzzle), I’ll drink to this one. Check out more details this article in Psychology Today.

This one surprised me. We’re always told to think of the glass as half full, but a 2013 study in the Academy of Management journal suggests just the opposite. That’s not to say that a positive attitude doesn’t have many benefits on a daily basis, and certainly people can be upbeat and innovative. But the flip side is that people are even more creative when they are feeling negative and then channel it into something positive. The jump from negativity to positivity increases the chance of tapping into big inspiration.

4) Look at Something Green 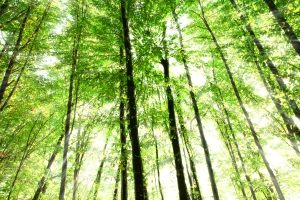 I knew there was a reason that this is my favorite color! A recent article in Prevention discussed how people exposed to the color green scored higher on a creativity test than any other color.

While you’re looking for something green, you might as well step outdoors. This one comes as no surprise to most of us, but now there’s proof. According to an article by the University of Utah, going for long hikes and being disconnected from the daily bustle yields big benefits for the creative process – people scored 50% higher on a creativity test after spending four days outdoors.

7) Send Electricity Through Your Brain

Here’s where we separte the boys from the men. I mean, who wouldn’t have a glass of wine or go for a stroll outside for a little inspiration? But it takes guts (or desperation) to hook electrodes to your head and send a jolt of electricity to your brain. But if you’ve reached the point where you’ll try anything, this really works. According to an article in the Atlantic Monthly, a recent study at the University of Pennsylvania showed that people were much more inventive when it came to coming up with unusual ideas after passing a weak electrical current through their brains.

Now to start on my next blog post, 5 easy ways to stop procrastinating and get back to writing 100,000 words in 100 days…

1 thought on “7 New Studies on How to Boost Creativity”